The Lingotek management team brings decades of experience and a history of managerial and entrepreneurial success. Our executives have stellar track records of combining technical expertise with business insight to develop innovative products that solve problems and enact positive change.

Jeff is one of the original founders and has served as CFO since Lingotek's inception. Recently, Jeff assumed the role of CEO. Having been with the company since it was merely an idea and future vision, he has been involved in every aspect of Lingotek's journey and, as a result, has a unique understanding of our long-term vision and goals.  Prior to joining Lingotek, he was the CFO and later CEO of Chipper Snax, a manufacturing company he took from inception to consolidation.

Prior to US Magnesium, Jeff worked for the international accounting firm of KPMG, LLP in its audit division. While employed there, he specialized in manufacturing and high tech public companies, and was involved with the accounting for numerous entrepreneurial companies in their early development stages. In this capacity, he assisted a wide variety of clients with various filings with the Securities and Exchange Commission.

Jeff has also lived overseas for a number of years and is fluent in Danish. He holds a B.A. in Accounting and an MBA. from the University of Utah.

Prior to being named Chief Revenue Officer of Lingotek in 2019, Vandenberg served as CEO for 10 years. Rob wanted to return to his roots in sales and sales management.

Preceding Lingotek, Rob headed up several successful ventures. He was co-founder and CEO of LocalVoice.com, which was acquired by HarrisConnect in 2005. He was named vice president of sales and marketing for HarrisConnect after the acquisition. Before his work with LocalVoice.com and HarrisConnect, he was one of the first 20 U.S. employees at INTERSHOP Communications, where he helped build its worldwide clientele as a top performing sales executive. The INTERSHOP initial public offering was one of the most successful enterprise IPOs in US history boasting a $10B market cap.

Rob holds a B.S. in Political Economics from UC Berkeley.

Nick holds a B.A in Philosophy from Hamilton College.

Kent Bridges has a broad range of experience in all facets of business development, sales strategy, and building global partnerships. Prior to joining Lingotek in 2008, Kent held Senior Executive positions in a number of Global High Tech companies including SVP Worldwide Sales at DigitalPersona, VoiceObjects, Gadzoox Networks, Zeitnet and Director of North American Sales at Novell.

Kent has a B.S. in Marketing/Finance from Brigham Young University and Post Graduate MBA studies at Seattle University.

Brad has more than 10 years of product management experience, with a wide range of experience at smaller startups and larger publicly traded companies.

During his 6 years with Lingotek, Brad has been instrumental in the growth of the company.  As the Head of Product, he is responsible for product vision, direction, and roadmap planning, ensuring Lingotek offers the most comprehensive and innovative products on the market.  He has launched numerous new features and enhancements along with several new products, including a workbench for in-context translation and review, intelligent workflow automation, business intelligence, and quality management.

Brad joined Lingotek in 2015 from Identifix, where he lead the Product/Program Management team.  During his time at Identifix, he was instrumental in several new product initiatives that opened new revenue streams for the company and received multiple awards for innovation and excellence.

Greg joined Lingotek with over 10 years of expereince in various sales and sales operations leadership roles.  At Lingotek, he is responsible for aligning all revenue arms (sales, client success, project management, partner channel and finance) and helping them to run like a well-oiled machine.  Since joining Lingotek in 2017, he has helped create many systems and processes that have helped Lingotek increase revenues by over 50%.

Prior to joining Lingotek, Greg first entered the SaaS market with Qualtrics (now SAP Qualtrics) where he was part of the early record-breaking revenue growth of the company.  After Qualtrics, Greg served as a sales and sales operations leader at InsideSales.com and later NUVI (now Brickfish).  At NUVI, he was an integral part of recruiting, training, and managing a sales department of over 50 sales professionals. Greg has focused on helping companies take control of their sales operations and forecasting models to prepare them to scale into a rapid-growth mode.

Greg holds a B.A. in Business Administration and Leadership from Southern Virginia University.

Meet the rest of the Lingotekers on LinkedIn

Language is social. It connects people and ideas. But what happens when it stops connecting, slows down, and goes offline? What happens when your global audience is left in the dark because your translations are stuck in someone’s inbox?

With the Translation Network, Lingotek makes your content accessible to your customers globally. By connecting your company with our technology and translators, we connect your ideas with the world. Lingotek makes going global possible.

Cloud Based Translation is Faster, Easier & More Efficient
Lingotek revolutionized the translation industry with its cloud-based networked translation technology. With Lingotek, you get an enterprise-grade, end-to-end solution that you control. Bring your translation workflow into the 21st century and get out from under the old-school, on-premise, traditional IT, and proxy architectures that slow you down and increase your costs with budget-busting implementation processes and ongoing maintenance.

Agile Software That Offers Scalability and Responsive IT
Our next-generation technology continuously delivers multilingual content and scalability to meet your increasing needs for more content, storage, and translation management. Lingotek’s cloud-based technology can extract large amounts of data and scale to any project size on the fly. With our agile software, Lingotek can be more responsive and can match your evolving requirements with fast IT.

Seamless Integration With Your Applications
Seamless integration with your enterprise applications and our translation management system lets you upload source content for translation, have it automatically translated, and download the translated content back into your original application.

Automated Workflows Put Your Translations on Autopilot
Put your translations on autopilot with customizable workflows that let you trigger actions throughout the project lifecycle. From notifying a reviewer when a translation is ready for review, to reporting project status to an external system, the Lingotek rules engine brings AI-like capabilities to your workflow.

Continuous, Real-Time Collaboration for Round-the-Clock Translation
With a vast network of translators working in our powerful cloud-based translation management system, you get continuous, round the clock translation and real-time collaboration.

Centralized File Management Gives You Control Over Your Content
Out-of-the-box integrations with popular CMS, CRM, marketing automation, knowledge bases, and social business software means your information resides in your system, giving you visibility, access, security, and control of your files and information.

Scalable File Storage to Match Your Growth
Our cloud-based Translation Network offers scalability that auto-scales to increased volume levels, without no additional charge for more file storage. It  can scale as your usage grows.

Secure Your Information With Controlled Access to Files
Content stored in the Lingotek cloud is fully secured and kept private to your organization. Role-based authorization ensures that users only see information if they have been granted access by your project administrator. 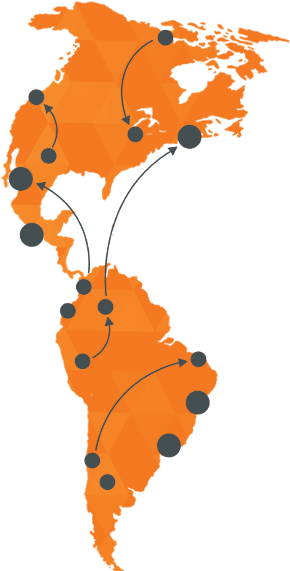 I Need a Centralized Translation Solution.

Learn more about The Translation Network.

I Need a Translation Management System.

Learn about our TMS and applications.

Learn about our enterprise application support.

Learn how Lingotek can translate any file type.

I Need to Localize Product and Support Documentation.

Learn about our product and support documentation services.

Customers can use their own language services providers (LSP) and linguists, or our global network of 5,000+ professional linguists. Lingotek is based in Lehi, Utah in the area known as Silicon Slopes.

Lingotek was founded in 2006 and is funded by Signal Peak Ventures and In-Q-Tel.

In-Q-Tel is a strategic, not-for-profit investment firm that works to identify, adapt, and deliver innovative technology solutions to support the mission of the U.S. Intelligence Community. Launched by the CIA in 1999 as a private, independent organization, In-Q-Tel's mission is to identify and partner with companies developing cutting-edge technologies that serve the national security interests of the United States. Working from an evolving strategic blueprint defining the Intelligence Community's critical technology needs, In-Q-Tel engages with entrepreneurs, growth companies, researchers, and investors to deliver technologies that provide superior capabilities for the CIA and the larger Intelligence Community.

Lingotek  works with some of the largest, most innovative companies in the world, in a wide variety of industries and services including government, technology, finance, telecom, travel, and education. Our clients include departments in the U.S. Government and several large Fortune 500 companies. Here are some of the Customers that are trusting their translation processes with the Lingotek Translation Network.

We also work with a growing network of Partners--service providers, digital agencies, open sources technologies, and other strategically selected companies--to meet the unique translation requirements of our customers.

It only takes 5 simple questions to determine if Lingotek is the right solution for your company.
Are you a translator? Click Here

What makes Lingotek unique is our track record of building, powering and managing the most successful and vibrant brands in the world.

Experience the Benefits of Networked Translation